Let’s talk about love! Yes, Love. Have you ever felt a really overwhelming passion, a dream that seemed to be true? But have you ever needed to stop it, suddenly, gathering all of your forces, your strength, just to stop listening…smelling…everything: everything that made you become mad…? When it is not clear what are you escaping from, but you run away fast. If you ever had this experience, it means that you’ve lived an impossible love. The “impossible love” is usually consumed in a very short time, but someone says that there are impossible loves that renew and live forever. By the way, never-ending or short, an impossible love is impossible to forget. There are a lot of movies about this, but I want to remember one in particular. It’s a black and white film, a masterpiece of the Nouvelle Vague: Hiroshima Mon Amour. In 1959 Italian censorship imposed a cut of 75 meters of film because of parts considered “immoral” and offensive. First of all, Hiroshima Mon Amour is a film about love, about the need and the impossibility of love. A city in ruins is going to have a new beginning after one of the greatest atrocities ever: the global nuclear war. A man and a woman meet themselves, they fall in love. She (Emmanuelle Riva) is a French actress that came to Hiroshima to take part in a film about peace, “What do they turn to Hiroshima but a film about peace?”. She stays a little, just the duration of the shoots. He (Eiji Okada) is a young architect, he lives there in Hiroshima, he works there, he will never go away. They have never directly experienced the explosion of the atomic bomb, but they are there, viewers like us. We hear throughout the film “Tu n’as rien vu à Hiroshima”. Hiroshima city begins a new life, but it’s still dying and Resnais shows it with several pictures, interposing the bodies of the two young lovers in contrast with the dead bodies browsed by atomic radiations. The ashes of Hiroshima fall down on the two lovers, almost in surprise, as if they were not there, in front of that horror, while passion is overwhelming both of them. A man and a woman without names strip off, and tell a story through two cities, Hiroshima and Never. Hiroshima and Never mix in front of the viewer, as well as the words of the two lovers.

Such an intense love to be consumed within a few days. Cruel enough to tell about suffering without seeking any understanding, mature enough to avoid lies, a love able to deform like a hall of mirrors. A love that will always stay there, in the city of Hiroshima.
She believes she has always known it, as if she expected to find that desire of vitality, of adultery, there in Hiroshima. But she will flee his glance, she will run away his kisses, the same kisses she could not withstand. Without looking back. It’s an adultery for both of them, but this isn’t the only reason why the two lovers are aware that their union will be short and, at the same time, destined to be forgotten. The soul closes itself with the same power with which it had opened, imperturbable, and glacial. She screams, with passion and detachment: “I know I will forget, I feel that I’m already forgetting you” .
We would like you have seen all this wonderful film (fresh restoration by the expert hands of the Cineteca (Cinemathèque) of Bologna, restored and uncut), but if you hadn’t, or you won’t see it just because you refuse any kind of film that speaks about love, we think anyway that at least one of you has felt, or maybe touched, her “impossible love”. Old or young, dreamers or disillusioned, even if we look for love at every glance, we would never be prepared enough upon his arrival.
Now it’s time to go. We dedicate you this song, listen to it on your own, or dedicate it to someone, you can do whatever you want,  it’s a perfect declaration of impossible love! 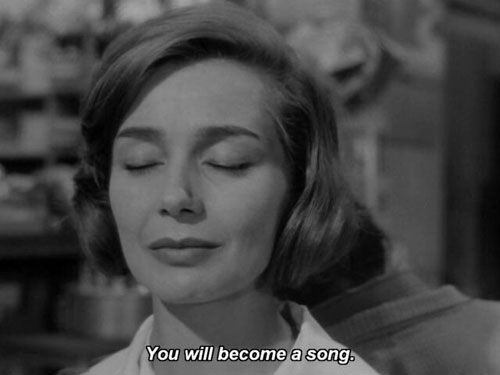