The Renaissance 3. An interview with Gerolamo by Cecilia Cavalieri D

Note: this is the official interview before the releasing of “The Renaissance 3 – To the Stars”, 12 songs’ album by Gerolamo Sacco. The article was translated from Italian.

Saturday evening, students are a bit sleepy after the Friday night. They’re at Via Mascarella waiting for Gerolamo Sacco who’s going to talk to them about his new album – Renaissance 3 – To the stars. We sit at one of the table set by the host in the walkway. Gerolamo was born here in Bologna, and after graduating he followed his passion, started as a DJ and was recognized by D’Agostino, however, after a while he abandoned disco to dedicate himself to studying classical composition. Singing came much later. In 2008 he decides to set on a journey solo and establish a record company. A bet, joined later by his brother, designer Niccolò.

We want to talk about Renaissance 3- to the stars, the third chapter of the Renaissance saga. 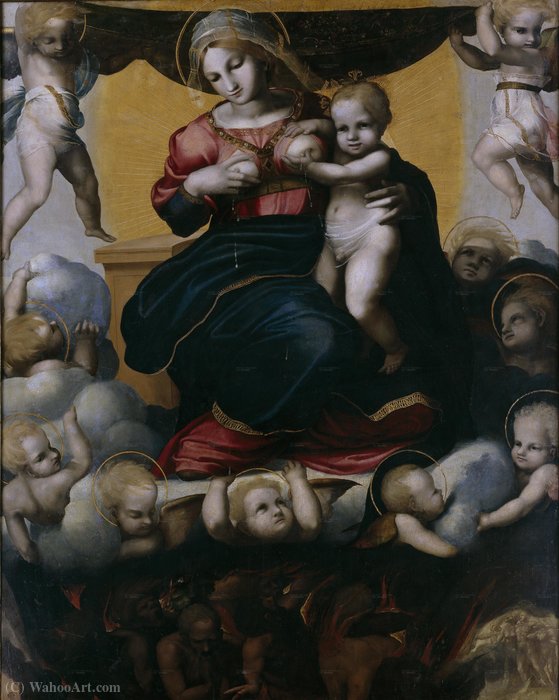 CECILIA: Gerolamo, the first album came out like a tempest: I sensed the willing of throwing yourself in a newly forming adventure. In the second one you’re using your cultured background to create something captivating for all who listen to your today’s work, you bring us back to the 1500, but your roots are in the dance music! The third Renaissance, in my opinion is just fantastic, starting from the dreamlike imagery. I have to ask you about the cover: I mean, a colorful nursing Madonna, inspiration of the Renaissance, luxuriant, sensual, surrounded by cupids coming from the clouds to feed on her breast…. All very romanticised, I gotta say! There’s just one small thing which caught my attention: the small Jesus is wearing mirrored sunglasses!

GEROLAMO: (laughing) – Yes, it’s the only modification we made on the original, it’s a bit like putting mustache on Mona Lisa… Like Dada art did. The previous Renaissance covers are also depicting the Nursing Madonna with a slightly “modified” Jesus. I choose every nursing Madonna with much care, because it has to represent the emotion of the CD, and there’s only one that fits. The first one was dreamy, cold, and magical. The second one is.. the bewildering beauty among the ruin (with no doubt experimental). The third one is much lighter, impudent, and sexy. I chose nursing Madonnas because for me they symbolize not only creation, but also creativity.

GEROLAMO: It’s an adult creativity hiding behind a childish gesture.

CECILIA: So it’s like your music: there’s antiquity, you can hear that but you don’t expect that, then the drums and synthesizer come and you realize there’s actually nothing antique here. It’s today’s music, made in 2014 and you hear that! Even without mentioning that in Renaissance 3 you sing in three languages – Italian, English, and French. Can I ask: why this choice?

GEROLAMO: I like new, futuristic music, which keeps its ties with tradition. I like recreating the future with the sound, keeping the one we have inside us alive with my lyrics and melodies. Every language has its sounds and its mysteries. There are three languages on the CDs- Italian (la Fontata), English (The future lullaby), French (Hirosima Mon Amour), all together (Born to Shine), and then, there’s the instrumental language (melodies with no lyrics, like Magicamentemia, Marcetta Ballerina, Canti dei Canti) and the magic of an invented language, like Mishekere. Totally invented! When I compose I often start from the melody, and then I realize that every melody …already has its language.

CECILIA: To understand it right, I’d make an example of your track Hiroshima Mon Amour (I was listening to it in the car while coming to Bologna) You composed it on the piano and you started to write the lyrics in French right away?

GEROLAMO: I don’t speak French. At first there was a pentagram; when I was humming it to myself it sounded freaking French! Every note, everything. So I took the phone and called my French friend Marc, and we found the right words to tell the storry (about two people who love each other but are about to split) in one evening with him.

CECILIA: What about Future Lullaby?

GEROLAMO: Totally English. Absurdly rhythmic, it makes fun of the tales that children read and also the irony is a bit “English humour”-like.

CECILIA: We’re talking about the risk that comes with the genre. Often it’s quite uncomfortable for the artist to be calssified.

GEROLAMO: I have a totally opposite problem. I’m so unclassifiable, that I’d sincerely like to be identified with something precise. But there’s no way!

CECILIA: If there’s no classification, the curiosity is born. For an artist who creates his own genere, made from the vague memory of classical music that gets electronically modulated. In my opinion you’re also quite fascinated with the feminine world. In at least four songs you included feminine vocals, not as a support but as a part of the dialogue, I’d say. In this aspect you’re getting quite close to the pop universe. Do you agree?

GEROLAMO: Pop! There it is, my genre!

CECILIA: Popular as the Renaissance..

GEROLAMO: In Italy, Renaissance is perceived as artistical-cultural, almost academic turmoil. But actually, it’s all pop. And also, as every pop thing, it was time of great contradictions, which explain very well why Italians are like this today. Have you ever seen “the Borgia”, or “Da Vinci’s Demons” on Sky? Americans have a much clearer idea of this period, because they know what pop is and so they’re able to depict the adventures of Lucrezia Borgia in a pop convention (non academic), having fun and making others have fun. Renaissance was genius and erratic, orderly and chaotic, spiritual and sexual. An explosive mess, but at the same time marvelously creative and intuitive. The paradoxical thing is that if I try to retrieve the sounds of Italy’s past in order to create electronic music, I have to think Iike an American!

CECILIA: In your opinion an Italian person can’t do it?

GEROLAMO: Rarely, maybe never. When we reach for the past forms, it’s to make music sound like from the past. I’m the opposite, I enjoy arranging tall tales with new sounds , synths created by me, sub-bass. I just get excited with this. You should see me when I’m writing a song, I start to dance alone!

CECILIA: Many of your pieces display this passion, in some others you seem to let yourself go into wholly diverse visions. I’m talking about your more mystical tracks, such as Canto dei Canti, The Ice Breaker, La Mente Nuova. How did you get to this state of “internal peace” ?

GEROLAMO: These are my “pure” compositions, born like that, the ones I wanted to sabotage the least possible. And I also listened to Vangelis and Jarre way too much when I was a kid… It seems a differet world from the one in the other songs, but, as every story they have moments of calm and moments of great energy. At times, calm has a compelling force. It’s like making love.