Season 2 of Gerolandia Express by italian artist Gerolamo Sacco will begin on March 23, 2012. We’ll link you this amazing interview about the forthcoming second season of the train, published for the russian online mag bizarremusic.

BM: We are on 21 March, 2012. Soon you will begin the second season of Gerolandia Express, the “train will wreck your brain”, your weekly podcast till June 8, 2012. First chapter will be online March 23 on mixcloud.com/gerolandia. Excited?

GS: A lot. And a lil’ bit afraid of it… This train changes my life. You know, last season I played six hundreds minutes of music, sixty new songs. During this space “tour” I have some difficulties to realize what’s happening on Earth. When I finished last Season 1 (12 chapters every week for all spring) I woke up realizing that at the beginning of Gerolandia Express I had a band, I had a girlfriend, and so on. Omg. I suddenly called my mother to know if everything was going well at home!

What are the differences between Gerolandia Express and other podcasts we listen to?

Firstly, Gerolandia Express is based on original music. I don’t play already famous songs to say “Hey! My podcast sounds good!” I play my works and sometimes works of artists that work with me in my record label. It’s really my world. There are two ways: you either play easy or you make art. I keep on reaching for the second goal. Secondly, Gerolandia Express is the only podcast where the most passionate listeners work together with the creator of the podcast. G.E is a train and my fans are passengers of this train, recording their voices in their mother tongue.
Thirdly: using voices recorded all over the world, we have a revolutionary idea that never happened before. This season I opened “tickets” to record, because as we increase, places will become limited.

What the voices “the passengers” of Gerolandia Express say? In what languages?

We have a lot of languages, from French to German, from Portuguese to Russian. They tell what they want: they just imagine to be really on a crazy train, they are wonderful. When I drag&drop most of the samples I have I really don’t remember what they are saying. It’s dangerous, lol.

What to do to be a passenger?

We have a mail, gerolandiaexpress @gmail.com . Everyone can write there asking for infos or to send samples. To plan how to work we use a private Facebook group. There are more than 30 fans and friends cooperating there! The ones who want to help in promotion have a dedicated ticket made by our staff!

Gerolandia Express is really a revolutionary idea, never happened before: why aren’t all people of the world talking about this?

Simply because not everybody knows G.E yet. Furthermore, you should consider that I’m not so famous: I have many people around me that appreciate what I do and how I do it, but I have no mainstream fan base. My project is poliedric (producer, songwriter, remixer, singer) and as the music market works on lower standards, a guy can recognize better, for example, a guitarist or another musician that’s been on the scene since at least 50 years, than a new kind of musician, able to create an entire record and place it suddenly. This role exists in electronic music, but is different, often it is just beat. Imagine a Guetta who sings and more rock-oriented. Since I sing (since last year, lol) people understand better, but it will be a long way for me.
There are two kinds of revolutions: the immediate revolution and the ones that employs more time. For example, just some years ago making a trance music podcast was useful, now TATW by Above&Beyond is the point and all people know it. Gerolandia Express will never become useless, because there will not be anyone able to produce my personal ideas. But I need time! About voices: now voice is not important because people are concentrated on pictures as a memory fixer, but I’m sure that a picture does not really reflect the personality of a person as the voice. One day, people who recorded for Gerolandia Express will hear their voice years and years before and..I’m sure: this kind of experience is not the same of watching an old pic. It’s something different and incredible.

Season 1 Season 2. What does it change?

Season One was the first experiment and has gone well. They have different souls. Season 1 it’s like “we are starting a trip”. In Season Two the theme is always “destination Gerolandia”, but with a different mood: it will be like a real space journey, since the beginning. This time the train will stop twice, every chapter: in Nowhere land and Alien Station (Extreme Turbolence! Don’t leave the train!) and as ending, Gerolandia Express ballroom. And as last the guide voices will be very different, I will personally act together with a girl: for this season my choice is a pro, and female, and more she’ll act intro/outro in Italian language. The opposite of Season 1! And it’s amazing.

Gerolandia: what does it means?

I heard some minutes of the Chapter 1, Season 2, it’s incredible. Technically: how did you made it?

I had to change the workstation for season 2… and upgrade my DAW to 24 GB ram, lol. Understand that is very difficult for a dj to make something like that (not considering the bigger fact that I play original songs). To work that way with voices and music one should have at least 5 years of constant work as a music producer.

Why there are not musicians in the world doing something similar?

Perhaps there are, but I don’t know. Sure not everybody has hundreds of songs and tracks, there are some bands that make 1 single every year and they feel productive. Other standards. I’m sure about this: in the future, music will have other quality and quantity standards. Quantity is a good meter of quality, in making music and art. And quality comes after quantity.

Other musicians does not agree...

Sure, because they can’t do that. In fact those who make few-records-a-year become…obliged to make work the quality aspect to other persons, for example in big studios.

I like the voice who says the speed of the train, but counting the bpm of the music you are playing: it’s wonderful! It’s the first time I see in a podcast: “the train is running at 105 bpm”. I like it!

I like too! Probably it’s the first time you notice it because usually, in podcasts, djs play only one kind of music often run at the same bpm to mix in time, and to mention it could become really boring: 127…128…126….127… In Gerolandia Express there are from 80 to 210 bpm song, the audio montage is like the one of a film, not of a dj set!

You work crossover between rock and dance scene. What do you think about these?

Both of them have both interesting and awful aspects. Interesting aspects are creativity in dance scene and the character creation is rock scene. But the problem is the stereotype: in dance scene most of the guys follow always the last idea, the last fashion, in rock scene the opposite, but same problem, they use already seen, already listened to stereotypes. I’m creating a format: Gerolamo Sacco is my name but also a symbol of what a person can do independently by the scene he follows, like in other arts: painting, cinema, where a character has his own style but living a journey into art freely and openly. I respect the way these arts opened. Andy Warhol can be everything he wants: he’s fucking “pop” anyway and he did not have to imitate any previous character. He’s just himself.

What’s the message behind your music?

Just one: be yourself and be free. This is why I recorded a video for a song in which I talk about this (Somebody Else): not my best song, just representative. When I take a sheet of paper, or when I sit in front my studio workstation, or in front of my piano, I just listen to my soul and I try to transform into something real what is hidden and unconscious.

Last Season you promoted your band, with special intros, performances, jokes, everything. Will we see something similar in Season 2?

Nou. This spring we’ll travel a little bit higher. The child is growin’ up!

You have a nickname, mr dragonfly. Why don’t you use it?

I already use that name, but I use it as a nickname, not as my stage name. With my real name I feel better in following myself. If I begin to use “mr dragonfly” as my service trademark, the day I want to play a jazz song for piano sung in French I shall have to change my stage name…not good. I’m Gerolamo and since my mom calls me this way, I’m that one…

What is the most awaited song of Gerolandia Express this Season?

I think the new version of Alice. People around me that heard it are really excited that a song can be upgraded that way in just 2 years. While I began the Renaissance Saga (2 albums, third forthcoming) and the Gerolandia Express, I worked at my songs album. Some of those songs I played during season 1, but now many are different versions: this album will be released when I will feel it’s the best it can be, and I think I reached the point this year after many months of work!

So. tell me your work in progress.

There is an entire down-tempo label, the project of electrotwist (the album “The origin of Electrotwist” is quite ready, you’ll find all the crazy twisty songs like Rhumba del Diablo and Woodstock. I’ve been working on it since 2009), the Amyl album (you heard some Amyls, but not all, it will be an experimental album), my album of songs I was talking about, with all italian songs (it will be probably called Cuore Fuori Tempo, containg 18 songs, from Alice to Sofia, from Somebody Else to Venere, all new versions) and Renaissance 3 is coming. This year I will take down ALL my songs from Itunes, and I’ll re-release the first 2 Renaissance remastered, than all the other works. I had to do this discographic move last year, but it is a complex job: we are talking about the management of more than 90 songs I worked on these 3 years of activity with the Gerolamo Sacco project. I want to also collect the album of Remixes but for that I’m waiting to remix some good name to promote better that album: I made already more than twenty remixes ready to release.

Why don’t you release many of your works once the first version is completed?

For 2 reasons. Firstly because some projects need time, or I risk to burn them. Every musical concept has a time of incubation, and this time is not always the same, like the 9 months of a child. Secondly, because I still don’t have a manager that beats me when I’m not releasing a song…

Who do you want to thank for this season 2?

A big hug to Eleonora, Gabriella, the little child, and to the first 10 passengers: Alex T from Italy, he was drummer in a band of mine, Katara and Naami from Germany, Gwen and Loryanne from France, Marissa from Ukraine, Vicky and Maria from Russia, Mara from Belarus and Natalia from Brazil. 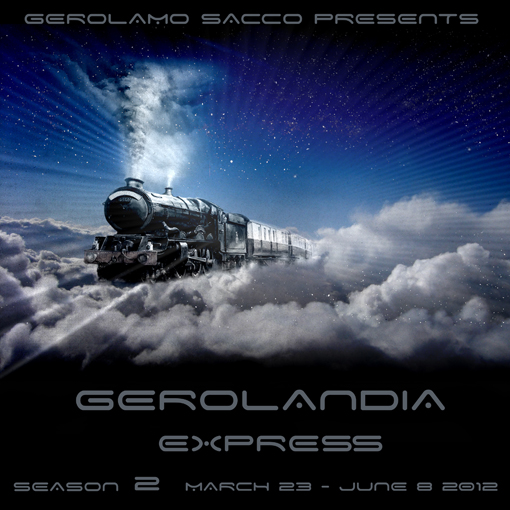 Freeeda - What I want: il Videoclip